Aviation - Global cargo volume has been consistently growing in 2017. The trend continued in the month of July as well. According to the data published by Airport Council International, the strong growth is reflected both in passenger as well.

September 23, 2017: Global cargo volume has been consistently growing in 2017. The trend continued in the month of July as well. According to the data published by Airport Council International, the strong growth is reflected in passenger as well. While freight volumes recorded a robust 8.9 increase, the passenger traffic grew by 6.8 percent in the said month.

Fuelled by strengthening global trade and industrial production, freight volumes continued their increase in July. On a year to date basis, global volume reached 8.4 percent drawing a particularly stark contrast with July 2016, where this number stood at 0.9 percent.

Most regions posted strong growth in freight volume, with Africa leading the group at 18.1 percent, followed by Europe with 11.2 percent increase, the Middle East recorded 10.6 percent and Asia-Pacific 9.3 percent. North America and Latin-America and Caribbean, did not benefit from the same surge, increasing 6.5 percent and 3.8 percent respectively, in line with their year to date numbers. 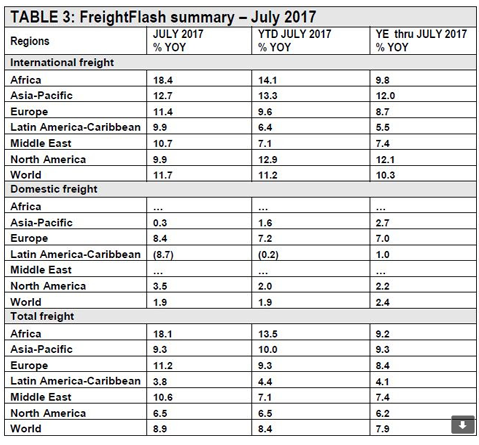 Two countries, in particular, helped boost Africa's freight numbers: South Africa and Kenya, both posting growth rates of more than 20 percent. Although most countries in Europe benefitted from significant growth in July, Germany and the UK, the two largest freight markets in the region, contributed significantly to these numbers, standing at 9.3 percent and 12.5 percent respectively.

As with the passenger traffic numbers, Istanbul Atatürk Airport (IST) were prominent in freight volumes, growing 32.2 percent year over year. Continuing a trend started in March; London-Heathrow (LHR) contributed a significant part of the freight market's increase in volume, growing 15.1 percent in July, year over year. Despite a decrease in passenger traffic at Doha International Airport (DOH) due to diplomatic fallout in the region, the airport continued its sustained growth in freight volume, reaching 14.5 percent year on year.

Despite macroeconomic forecasts remaining cautious for the year, improving conditions in most regions led to sustained growth up until July, with a global year to date growth reaching 6.9 percent.

Europe again stood out from other regions, leading total passenger traffic growth with 9.9 percent on a year over year basis. The region's year to date growth reached 9.4 percent, 1.5 percentage points over its closest peer, Asia-Pacific. Although international passenger traffic growth has provided a significant contribution to the region's growth throughout the year, Europe's domestic market also increased substantially in July, reaching 8.4 percent.

Asia-Pacific, although having benefitted from typically robust growth throughout 2017, experienced a slight slowdown in July, growing 5.7percent. And Africa's traffic growth accelerated during the same period, reaching 7.5 percent against its year to date figure of 5.4 percent. The region's gains were distributed particularly unevenly, especially in Northern Africa, with Marrakech (RAK), Tunis (TUN) and Algiers (ALG) all posting double-digit growth, and Cairo (CAI) and Enfidha (NBE) declining by comparable numbers.