October 3, 2017: The state-owned Qatar Airways has celebrated its twentieth anniversary with much fanfare. A Qatar Airways aircraft flew in formation with the world-famous Red Arrows aerobatic display team over Doha.

October 3, 2017: The state-owned Qatar Airways has celebrated its twentieth anniversary with much fanfare. A Qatar Airways aircraft flew in formation with the world-famous Red Arrows aerobatic display team over Doha.

The event, hosted by the British Ambassador to the State of Qatar, Ajay Sharma, and Qatar Airways Group chief executive, Akbar Al Baker, along with a number of other ambassadors as well as Qatar’s Minister of Municipality and Environment, Mohammed bin Abdullah Al Rumaihi. The other dignitaries who attended the function include, chairman of Qatar’s Civil Aviation Authority, Abdullah bin Nasser Turki Al Subaey along with the representatives of the Qatar British Business Association. 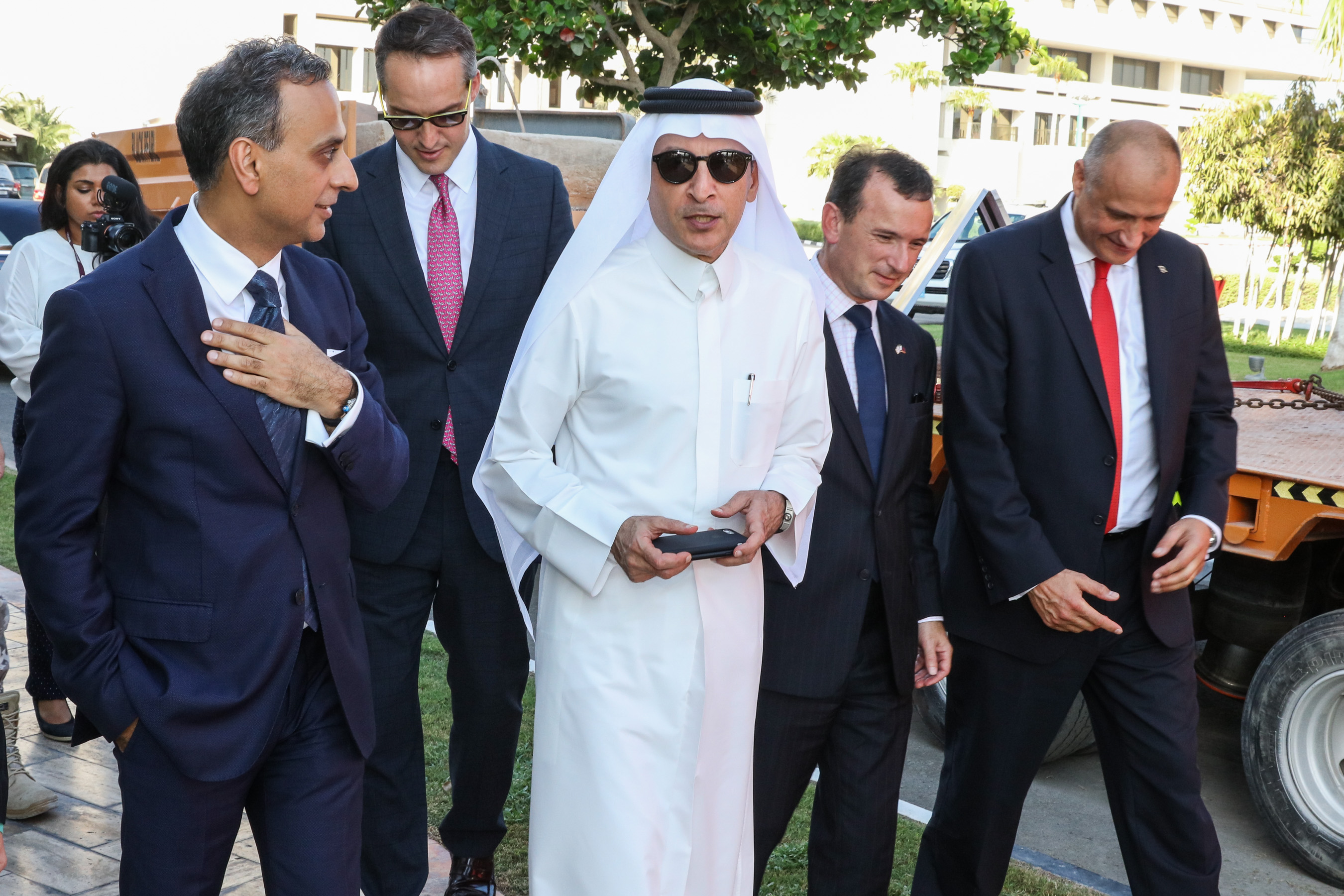 The display took place in the skies above Doha as a state-of-the-art Qatar Airways Airbus A350, for which the airline was the global launch customer, flew in formation with the British Royal Air Force’s (RAF) iconic Red Arrows. Their distinctive fleets of Hawk jets were on hand to display the speed, agility and precision of the RAF and fly in their trademark diamond nine formations to join in the salute to Qatar Airways and its 20 years of operations.

Qatar Airways Group chief executive, Akbar Al Baker, said, “It has been an honour to have one of Qatar Airways’ Airbus A350 aircraft join forces with the world-famous Red Arrows and take part in today’s historic fly-by over the impressive Doha skyline. The Red Arrows have helped Qatar Airways celebrate in style with a thrilling display to mark our twentieth anniversary. In just two decades, Qatar Airways has exceeded all expectations, to rise from humble beginnings to become one of the world’s leading and most admired airlines. This year we were named Airline of the Year by Skytrax, which is the fourth time we have won this prestigious award.

“I am very proud of all that Qatar Airways has achieved in the past 20 years, and as we embark on the next 20 years, I look forward to continuing to demonstrate the passion, innovation and award-winning customer service that we have become renowned for.”

The British Ambassador to the State of Qatar, Ajay Sharma, said, “I am delighted with the welcome that the UK’s Red Arrows have received during their visit to Qatar this weekend. Residents and visitors alike have come out in force to see the air display, demonstrating the close relationship between our two countries. I am glad that the Red Arrows’ visit coincides with Qatar Airways’ twentieth-anniversary celebrations. Qatar Airways is an important partner for us and plays a key role in moving UK-Qatar relations forward.”

The fly-by and unique aerobatics display had been carefully planned in advance by Qatar Airways and the Red Arrows, working in partnership the Qatar Civil Aviation Authority (QCAA). Also involved in the careful preparations were the Ministry of Defence, the Emiri Guard and Qatar Civil Defence representatives.

Qatar Airways’ flight operations experts produced a special flight plan that enabled one of the airline’s Airbus A350 aircraft, capable of carrying up to 283 passengers, to fly empty in close formation with the Red Arrows Hawk jets. The highly-agile jets can fly at speeds of up to 1,028 km per hour or Mach 0.84. Qatar Airways Chief Flight Operations Officer, Captain Konstantinos, was at the helm of the A350 aircraft throughout the display.

The nine-strong fleet of Red Arrows aircraft and their pilots visited Qatar as part of an extensive global tour, acting as ambassadors for the United Kingdom to promote ‘the best of British’ goods and services. Since they were formed in 1965, the Red Arrows have performed over 4,700 displays in 56 countries worldwide.

Also on display was a Rolls Royce Trent XWB engine used on the Qatar Airways Airbus A350.